A fire ripped through a 24-storey block of flats in west London early on Wednesday, killing at least six people and trapping dozens of residents, some of whom were seen throwing children from windows in the hope they survive the blaze.

Eyewitnesses said they had also seen some people fall or jump from the Grenfell Tower, a 1970s building in the working-class north Kensington area, after it caught fire at around 1am UK time (0530 India time). There were fears that the building might crumble due to the blaze, police said.

“I can confirm six fatalities at this time but this figure is likely to rise during what will be a complex recovery operation over a number of days,” police commander Stuart Cundy said in a statement.

London’s Ambulance Service says 74 people are being treated, 20 of whom are in critical condition. Paul Woodrow, the head of operations, said that the patients were being treated for a range of injuries and smoke inhalation.

Fire fighters struggled for hours to cope with what was called a “major” incident and an “unprecedented situation”.

Prime Minister Theresa May’s office said in a statement the leader is “deeply saddened” by the devastating fire that engulfed a high-rise apartment block in west London.

The Indian high commission set up a helpline for Indian citizens affected by the overnight blaze.

Between 400 and 600 people were estimated to be lived in the building,

London Fire Brigade commissioner Dany Cotton said, “Over 200 firefighters and officers are attending this incident, with 40 fire engines and a range of other specialist vehicles, including 14 fire rescue units in attendance.”

“London ambulance service have confirmed that a number of people have been taken to five hospitals. At this time I am sad to confirm that we now know that there have been fatalities. I cannot confirm the number at this time,” she added.

Cotton said the structural engineer was monitoring the stability of the building, which appears safe for now. Cotton added that they were still looking for any remaining people inside the tower block.

The cause of the fire was not known, but as witnesses and survivors narrated harrowing accounts, residents in the area said apprehensions about the building’s fire safety were expressed in the recent past, but little notice had been taken by authorities.

A witness, Samira Lamrani, told Britain’s Press Association she saw a woman try to save the baby by dropping it from a window “on the ninth or 10th floor.”

She said, “people were starting to appear at the windows, frantically banging and screaming. The windows were slightly ajar, a woman was gesturing that she was about to throw her baby and if somebody could catch her baby.

“Somebody did, a gentleman ran forward and managed to grab the baby,” she added.

London ambulance service said 50 people had been taken to five hospitals after the high-rise fire.

London mayor Sadiq Khan said questions needed to be answered about the fire advice given to residents: “One of the concerns that we have is it’s a 24-storey building but for obvious reasons, with the scale of the fire, our experts weren’t able to reach all the way to the top, so of course these are questions that need to be answered as soon as possible.

“A lot of people” are still unaccounted for and “fire crews only managed to reach the 12th floor at the height of the fire,” he said. 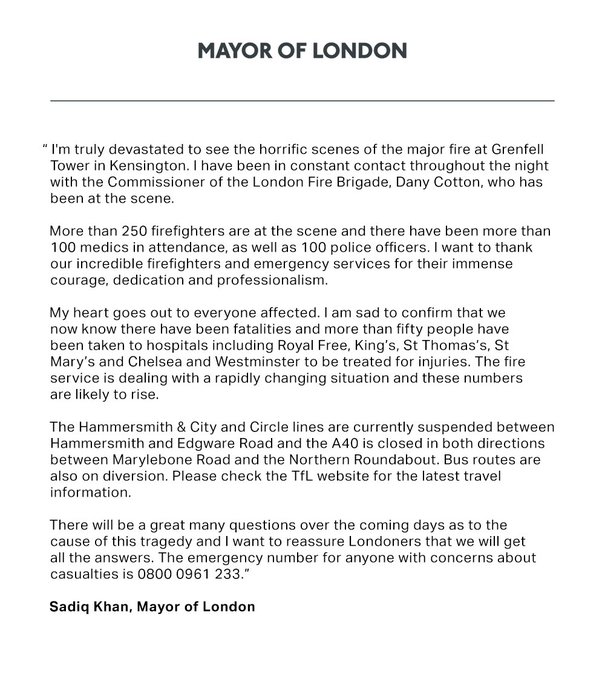 I’m truly devastated to see the horrific scenes of major fire at #GrenfellTower in #Kensington. Read my statement https://www.facebook.com/MayorofLondon/posts/478888289124000 …

“It’s very distressing, not just for those of us watching as lay people, but also very distressing for the emergency services. We declared a major incident very early, which meant not just the fire service but also the London Ambulance Service, the police and the others were involved at the scene,” Khan told BBC Radio 4.

Some residents were seen using bedsheets to make their escape from the tower block. Witnesses could hear screaming from the upper floors as the flames rose and one desperate resident could be seen waving a white cloth.

Eyewitnesses said they had seen others fall or jump from the stricken building.

“It has burned through to its very core. It looks very bad, very very bad. I’ve never seen anything like this. It’s just such a big fire. The whole building is just crumbling. It’s just billowing black smoke,” an eyewitness told the BBC.

The burnt facade of a tower block. (Reuters Photo)

Police turned a church near the scene into a makeshift centre for evacuees.

Many people at St Clement’s church are in wheelchairs and have been brought from adjacent buildings that were evacuated by firefighters because of fears the fire might spread.

London’s Metropolitan police service tweeted, “Residents continue to be evacuated from the tower block fire in North Kensington. A number of people being treated for a range of injuries.”

The police said an emergency number had been set up and anyone concerned for loved ones can call the casualty bureau at 08000961233.

Watch: London fire that has been raging for five hours

Nassima Boutrig, who lives opposite the building, said she was awakened by sirens and smoke so thick that it filled her home as well.

“We saw the people screaming,” she said. “A lot of people said ‘Help, help, help.’ The fire brigade could only help downstairs. It was fire up, up, up. They couldn’t stop the fire.”

A photograph posted by the fire service showed the side of the building engulfed in flames.

Police said in a statement they were called at 1:16am (0016 GMT) “to reports of a large fire at a block of flats in the Lancaster West Estate”.

Tim Downie, who lives not far away, told Britain’s Press Association that he feared the building could collapse. He said he heard sirens, helicopters and shouting and then saw the building engulfed in flames.

“It’s the most terrifying thing I’ve ever seen. I just hope they have got everyone out,” he said. “People have been bringing water, clothes, anything they’ve got to help, out to the cordon.

A police officer helps evacuate a resident from near the raging tower block at Latimer Road in West London. (Reuters Photo)

Police closed the A40, a major road leading out of west London, while some parts London’s underground train network were closed as a precaution. “Please avoid the area to allow emergency services access to the scene,” it tweeted.

The apartment block was built in 1974.

Flames and smoke rise as firefighters deal with a serious fire at Latimer Road in West London. (Reuters Photo)

George Clarke, the presenter of “Amazing Spaces,” told Radio 5 Live he was covered in ash even though he was 100 meters (yards) from the scene.

He said he saw people waving flashlights from the top level of the building and saw rescuers “doing an incredible job” trying to get people out.

(With inputs from agencies)