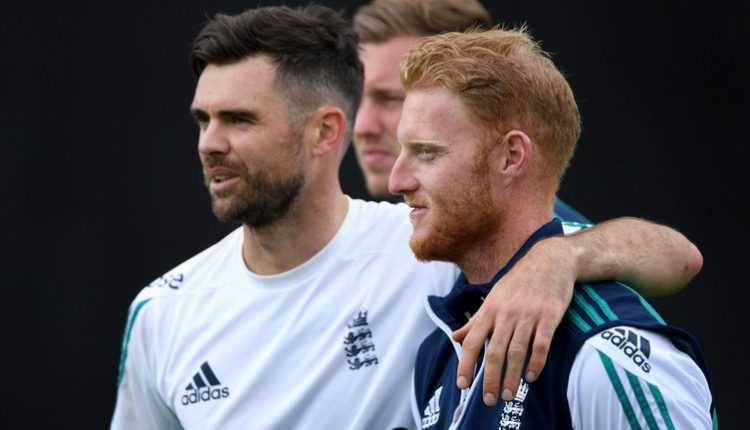 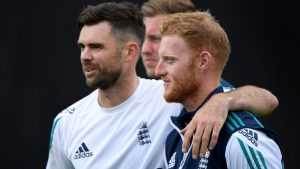 Stokes, England’s Test vice-captain, is playing under Australia skipper Smith for Royal Pune Supergiant in India’s T20 tournament after being signed for £1.7m – a record IPL fee for an overseas player.

Anderson says the Durham all-rounder – one of eight English players in the competition – could gain some valuable insights into Smith’s game over the next six weeks.

“Playing in the IPL can only benefit the English guys because they’re playing with and against some of the best players in the world and can tap into that knowledge that they’ve got,” said Anderson, who has 467 Test wickets under his belt.

“Maybe Ben Stokes can get some inside information for us on Steve Smith for the Ashes! Hopefully Ben isn’t giving too much away to Steve about himself!

“The more cricket you play with someone and the more you watch them, the more you pick up little things about their technique or something that could give you the edge over them when you come up against them in a Test match.”

England’s focus before then, though, will be on white ball cricket – in particular the 50-over version ahead of the ICC Champions Trophy, when Stokes and Smith are likely to go head-to-head for their respective countries in Group A.

A little over two weeks after the Champions Trophy final, England’s Test summer will finally get underway with new captain Joe Root leading the side after succeeding Alastair Cook as skipper.

“I think he’ll do really well,” said Anderson, reflecting on the appointment of Root. “He’s dealt with everything that’s been thrown at him in his international career so far really easily and comfortably.

“He’s an exciting cricketer and he’s positive as well; I think he’ll bring that to his captaincy – he’ll be positive and attacking in the field, and hopefully it will benefit his batting as well.

“You don’t want somebody to lose their personality just because they become captain; there will obviously be times when he needs to be serious but it helps having a sense of humour, certainly in a dressing room environment when it can be high pressure at times; lightening the mood is a good thing.

“He’s still young and he’s got his immature side, which is his jokey side, but I think this will help him; he’s just become a father as well, which will help him mature.

“When he bats he bats with a lot of maturity but I hope that he doesn’t lose that jovial side because that’s what makes him the player he is.”

Anderson was back in action for Lancashire this week after recovering from a shoulder injury sustained on England’s winter tour of India.

The 34-year-old, who took 5-10 against Cambridge MCCU earlier in the month, took 3-56 in the first innings of the County Championship opener against Essex but went wicketless in the second dig as the Chelmsford outfit dug in for a draw.

“It’s been nice to have a few months off to concentrate on my fitness,” said Anderson. “I’ve been with Lancashire for three months now. I played this week and pulled up pretty well, so I’m hopeful that I can stay fit throughout the summer and put up with the rigours of a busy Test summer.

“I’m smarter with the way I practice now; I’ll bowl less in practice and try to look after my body, and do a bit more gym work.

“Since I turned 30 that’s been the biggest thing for me – feeling like I have to do more in the gym to make sure that I look after myself a bit better.

“As long as I’m enjoying playing and playing well, I just want to keep going as long as my body allows it.”