No Eid festivities this year at Donald Trump’s White House

Ending the tradition of Iftar in the White House, US President Donald Trump did not throw any dinner party on Sunday to mark the end of the month of Ramadan. With this, the ritual that started under former First Lady Hillary Clinton in 1996 came to an end. Reportedly, White House officials would get busy for months preparing the Iftar dinner in every administration since Bill Clinton’s — George W Bush and Barack Obama followed the suit.

The White House, however, issued a statement on late Saturday evening extending greetings:

“Muslims in the United States joined those around the world during the holy month of Ramadan to focus on acts of faith and charity,” the statement reads. “Now, as they commemorate Eid with family and friends, they carry on the tradition of helping neighbours and breaking bread with people from all walks of life.”

“During this holiday, we are reminded of the importance of mercy, compassion, and goodwill. With Muslims around the world, the United States renews our commitment to honour these values. Eid Mubarak.”

Secretary of State Rex Tillerson rejected requests of the State Department’s Office of Religion and Global Affairs to host a reception marking Eid al-Fitr, according to two administration officials familiar with the decision, as reported by CNN.

Like Trump’s predecessors, all Secretary of States before Tillerson also hosted iftar dinner to break the fast during Ramadan. 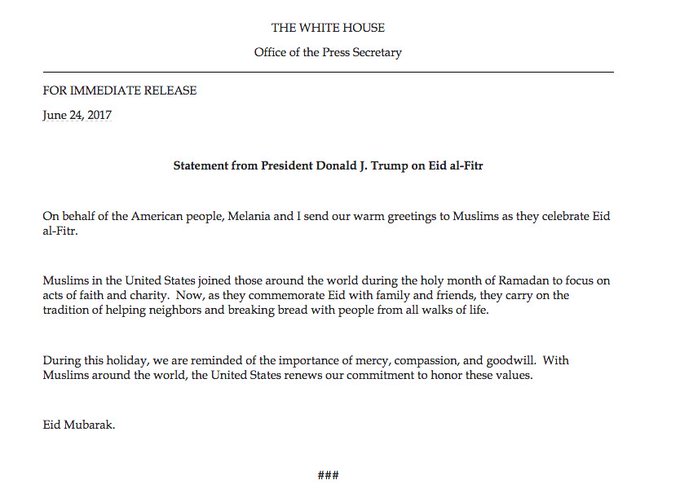 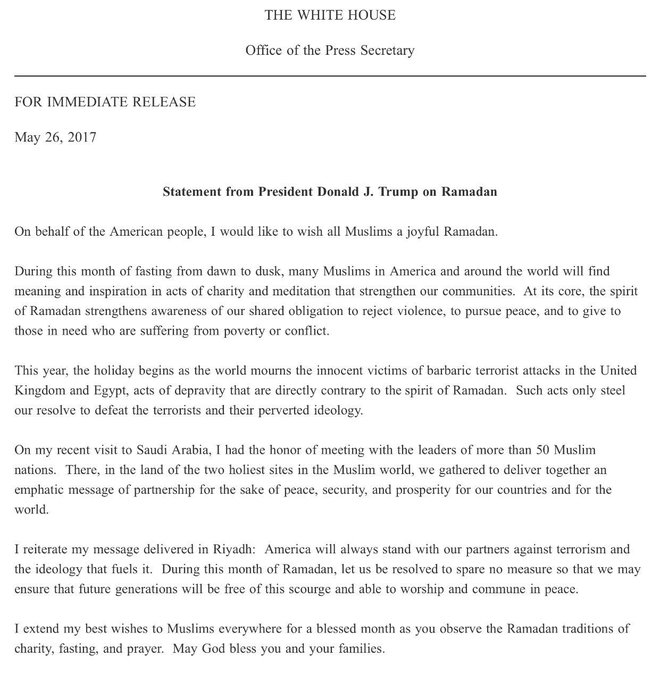 Just in: Trump statement on Eid al-Fitr. Noticeably different from Ramadan statement, in which nearly every paragraph alluded to terrorism.

Before, Trump has tried to impose travel ban on people coming from several Muslim-majority countries. Despite his overture to Saudi Arabia during his visit to the Middle East, he relations with Muslims has been fraught with tensions.

The first White House Iftar dinner was hosted by President Thomas Jefferson in 1805 for a Tunisian envoy, then it was revived by Hillary Clinton in 1997.