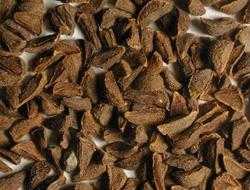 When spalanaey seeds ( more commonly known to Westerners by their Persian name espand ) are dropped on red-hot charcoal they make a popping noise and give off a great deal of fragrant smoke. This is done to ward off the “evil-eye”. The evil eye belief is that a person, otherwise not evil in any way, can harm you, your children, your house, your health and so on by looking at you with envy and/or praising you. The evil eye or Nazar can be done out of love and unintentionally so it does not always have “evil” intentions attached to it.

This ancient tradition has it’s origins from Zorostrianism and is still widely practiced today. In Iran, Afghanistan, and Tajikistan when a child returns home after being among strangers, some parents will light a charcoal disk and burn the spalanaey seeds while reciting a poem, actually an ancient Zoroastrian prayer, against the evil eye and directing the smoke around the child. This is done as a protective measure, whether or not it is suspected that the child has been given the eye. The rite consists of an invocation prayer to a deceased but historical king of Persia known as Naqshband, while burning espand/ spalanaey seeds. The word espand refers to a class of Zoroastrian Archangels. It was common that our Zoroastrian forefathers used to pick a patron angel for their protection, and throughout their lives were observing prayers dedicated to that angel. Today whenever we burn espand grains to “espand” ourselves, it is in fact the invocation of blessing of the archangels (Amahraspand or aspand) that our ancestors observed prayers to. In some homes today verses from the Koran are recited instead of that ancient prayer.

An Afghan Spandi burns seeds to drive away the evil eye in the early morning in Kabul, Afghanistan. Spandi is a person who walks around the neighborhood with a burning pot of the spalanaey seeds to sprinkle incense in return for a small fee.

The Pashtuns are the Tribes of Israel