News Network for Afghanistan and Pakistan

The new face of the New Afghanistan

The Pen Path Civil Society (PPCS) with the close collaboration of tribal elders has been succeeded in reopening of at least 20 closed schools in the southern Kandahar province.
“There were a number of male and female schools in various districts of southern Kandahar province, which were closed due to various reasons but the PPCS reopened it through tribal elders mediation,” an office bearer of the Pen Path Civil Society, Attaullah Wesa told.
According to him, his team held meetings with the local tribal elders, youth of the area, and officials of the Ministry of Education which paved a way to reopen 20 schools in various villages in Kandahar province.
Prior to this the PPCS has been succeeded in reopening of more 32 closed schools in all 34 provinces of the country. The PPCS is working for the promotion of education and striving to enroll each and every Afghan child in schools across the country.
Attaullah Wesa said, “16 closed schools in Spin Boldak, Arghandab, Zhari, Dand, Takhta Pol and Kandahar city have been reopened last week.” He added all efforts are on card to reopen all closed schools across the country which is possible with the kind support of local elders, youth and the ministry of education. “The aim of our struggle is to ensure primary and higher education for Afghan children, as we believe education for all.” He further went on saying, “We are struggling to bring change through education in Afghanistan.” He urged the government and international donors to pay required attention to education which is key to peace and stability in the country. He furthered, “If proper resources were not provided by the education ministry, the reopened schools would go back to its past time of closure.”
He said more than 10 million male and female students have been enrolled in the country. However, there are still many hindrances to educate all children due to lack of funding, unsafe school buildings and the Taliban-led insurgency.
He pointed out that there are a large number of schools which have no buildings and other required materials, adding, lack of professional staff is another burning issue which needs war-footed decisions and comprehensive policy by the government.
Wesa called on the government to increase salaries of the teachers, performing duties in remote areas. He said private buildings must be rented for the students of those schools that yet to have official buildings. He added, the un-sufficient attention and contributions by the government has added to uncertainty and grievances among the common people.  Attaullah Wesa called on the international community and donors organizations to support the Pen Path Civil Society in its struggle based on enlightening the mountains and deserts of Afghanistan through the light of education. He said, education is the fundamental right of every child, guaranteed by the various international conventions.  The government and the international community should recognize their responsibilities to ensure this right for all the male and female children of the war-torn country.
Wesa added, being a war-torn country, children in Afghanistan require special attention to provide them quality education and comfortable educational environment, needed for legislative, administrative, social and educational measures to protect our children from all forms of physical or mental violence, injury or abuse, neglect or negligent treatment, maltreatment or exploitation.
He urged the government, USAID, Save the Children, United Nations relevant bodies and Afghanistan’s international partners and donors to further contribute to the conflict devastated Afghanistan’s education system.
The PPCS which was established in 2009, so far helped around one million poor children to receive books and stationery while bringing more than 3,000 poor orphan children from deprived villages to cities to get admissions in schools and they were provided financial assistance as well. 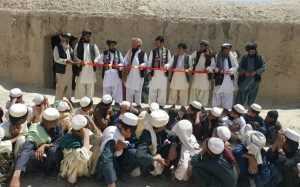 While already established 13 public libraries in various provinces, the PPCS led by Attaullah Wesa and Matiullah Wesa (the two education lover brothers) and their group has a plan to build six more in deprived areas in a bid to meet demands of the local people.
Wesa and his friends during the campaign several times faced armed clashes and survived landmine explosions, but were determined to pursue their educational campaign.
The PPCS campaign also includes meeting children and encouraging them with the gifts in most derived and poor villages. For this reason, they have distributed more than 75,000 books and thousands of stationery and school bags to the poor children.
In a rave move, Afghan volunteers from the Pen Path Civil Society (PPCS) have risked their lives while braving insurgent attacks, landmines and geographical restricts and transportation challenges to complete their education promotion campaign to the remote villages of all 34 Afghan provinces with a message to mobilize the local communities for promotion of education.
Besides, visiting closed and deprived schools in remote communities, the young motivators have held meetings with local elders, young and religious leaders to mobilize them to safeguard their schools, let girls attend classes and to advocate for reopening of the closed schools, even in areas under the Taliban control

Why do the Taliban in Afghanistan oppose women’s education?

A brave Arab Woman fighting to live freely and independent

Manage Cookie Consent
To provide the best experiences, we use technologies like cookies to store and/or access device information. Consenting to these technologies will allow us to process data such as browsing behavior or unique IDs on this site. Not consenting or withdrawing consent, may adversely affect certain features and functions.
Manage options Manage services Manage vendors Read more about these purposes
View preferences
{title} {title} {title}