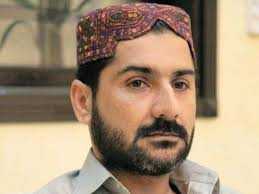 The Pakistan Army early Wednesday morning said it had taken Uzair Baloch, a notorious leader of the Lyari gang war, into custody in accordance with the Pakistan Army Act.

Uzair was arrested by Rangers personnel outside Karachi last year in January in what the paramilitary force said was a raid.

The court had then handed him over to the police on remand. A joint investigation team (JIT) formed to probe the case in May 2016 said Uzair had allegedly worked for an Iranian intelligence agency, and had recommended that the head of the outlawed Peoples Amn Committee be tried by a military court for ‘espionage’.

The JIT report, signed by representatives of the Sindh police, Rangers and intelligence agencies, was sent to the home department on April 29 last year for “perusal and necessary action”.

According to the JIT report, a copy of which is available with Dawn, Uzair was involved in “espionage activities by providing secret information regarding army installations and officials to foreign agents (Iranian intelligence officers) which is a violation of the Official Secrets Act 1923”.
Entangled in controversy

The saga of Uzair’s arrest is embroiled in controversies, as more than a year after his reported arrest in Dubai by Interpol, he mysteriously surfaced in Karachi — only to be caught by Sindh Rangers in a ‘targeted action’.

Uzair, once known for his loyalty to the PPP and close contacts with some of its leaders, was declared an absconder in over 40 cases pending before anti-terrorism courts.

Around 35 cases pertaining to murder, attempted murder and attacking the police had been registered against him during an operation conducted in Lyari in 2012.

He was also declared a proclaimed offender in the triple murder of Arshad Pappu, the alleged leader of a Lyari gang, his brother Yasir Arafat and their confidant Juma Shera, who were killed in Lyari in March 2013.

A few hours after he was caught by the Rangers in early 2016, Uzair was produced before an administrative judge of the antiterrorism courts in Karachi and informed that his arrest was made “in Chakiwara” — a Lyari area that is not on the outskirts of Karachi — and of his three-month detention for inquiry.

He was held in 90-day ‘preventive detention’ by the Rangers, who later handed him over to police.

While the high-profile arrest caused quite a stir in the national political scene because of Uzair’s previous association with the PPP, the official version of the actual events remained shrouded in mystery.

On Dec 29, 2014, Uzair was reportedly arrested in Dubai by Interpol when he was crossing into the United Arab Emirates from Muscat by road. The Interpol arrest was confirmed by Pakistani authorities, and they event sent a Karachi police team to the UAE within a week to take Uzair’s custody, but to no avail.

Later, the same team visited the Gulf state several times, met security officials there and also held meetings with Interpol, but did not succeed. However, it was reported that UAE authorities had secretly handed over Uzair to Pakistani sleuths, who later brought him to the country last year.

Since then, the former gangleader and several of his gang members — including Amin Buledi, Ramzan alias Ramzani, Abdul Ghaffar alias Mama and Zubair Baloch — have been booked for five murders, including the killing of a station house officer, and two cases of police encounters registered during the 2012 Lyari operation.

However, last week, a trial court acquitted Baloch in a case pertaining to an attack he allegedly carried out on police in Lyari in 2012 citing lack of evidence.

Despite the acquittal, numerous cases remain pending against him.DN